In April 2020, Oryx Universal College in partnership with Liverpool John Moores University kickstarted its journey with a distinctive set of students enrolled in MSc Project Management, a pioneering programme in Qatar, not offered by any other higher educational institution before.

The on-set of the COVID-19 pandemic pushed the team comprising of the staff and students at the College into a newer challenge against a rapidly evolving academic landscape. With unrelenting efforts, efficient adaptability and persistent dedication, the team was able to stay afloat, managing its way to their destination successfully. The students of the Project Management cohort ensured to make the most of all the resources available to them all the while adjusting to new and improved ways of learning.

Today, the cohort proudly stands as graduates of the programme, offered by Liverpool John Moores University and the first from Oryx Universal College in Qatar.

The graduation ceremony, held on 18th November at the Sheraton Grand Hotel and Resort Doha, was a momentous celebration of these graduates as well as a key milestone for Oryx Universal College, serving as a statement of its fortitude and immense success garnered over the past year, especially as a newly established private university education provider in Qatar.

Mr. Azmy Ameer, the President of Oryx Universal College in partnership with Liverpool John Moores University, had declared the ceremony open and had inaugurated the event by evoking the journey of the College with its team of staff and the graduating students. Ameer had proceeded to emphasise the anticipated contribution of the graduates to the next level of growth, nationally and globally stating ‘now it is the time to perform’. Identifying the vast amount of knowledge and information available to humanity as a whole, Ameer, reiterated the importance of awareness we have towards the risks and challenges of the future, thereby pointing towards the ‘unprecedented opportunity our generation has to make good decisions and to take relevant actions today.’  He put forth the need for great leaders for a greater future, welcoming the graduates to be a part of that journey representing themselves as alumni and ambassadors of the College.

One of the major highlights of the evening was the launch of the official crest of Oryx Universal College. Encased in shades of the organisation’s brand and embellished with iconic images of Qatar’s heritage and culture, it read ‘Ultra Scientiam’, the crux of the institute, Knowledge and Beyond.

Joining the event from Liverpool John Moores University was Professor Warren Gregson from the School of Sport and Exercise Sciences. Representing the prestigious university and the collaborative partner, he stated that ‘Liverpool John Moores University and Oryx Universal College have come together to share the vision of empowering the upcoming and future generation to be global leaders. This partnership has created a platform for you to access an institution with a solid reputation, providing students with highest quality teaching and a learning experience informed by relevant, credible and world-leading research.’

Her Majesty’s Ambassador to Qatar, H.E. Jonathan Wilks CMG, also joined the ceremony recognising the achievements made by the College in face of a global adversity. Highlighting the graduates’ lifelong connection with Oryx Universal College as well as Liverpool John Moores University, he added that ‘you also become a part of an even larger family which is the family of UK alumni all over the world.’ He proceeded to explain the significance of an alumni group for every alumnus of a UK university in a country housing the British Embassy and the British Council, therefore welcoming the graduates to be an active part of the community.

Distinguishing Doha, as one of the great cities of the 21st century to be in, H.E. Jonathan Wilks added that the vision and the subsequent growth and development over the last 25 years has allowed the city to become an exciting and unique place to be in, in the contemporary era. Given the prospects of the future, with the vision yet to be fully realised and implemented, the graduates have ‘a real privilege, that in some ways you will understand the world and what we are going through now better by graduating here than many other places’ as stated by him.

The conferral of the degrees was officiated by the Dean of Academic Affairs, Professor Rafid AlKhaddar. Professor AlKhaddar, who had formerly been a part of Liverpool John Moores University, had joined Oryx Universal College in early 2021. The graduands were invited to collect their degree award for MSc Project Management. President of the College, Mr Azmy Ameer invited Professor Warren Gregson to handover the degree award and Chairman of the Board of Trustees of Oryx Universal College in partnership with Liverpool John Moores University, Dr Homaid Al-Madfa, to handover the memorabilia to the graduands. The end of the conferral marked the recognition of astounding students, four among which earned a Distinction, as the first cohort of graduates from the College, earning a British Qualification not offered in the State of Qatar before.

Oryx Universal College in partnership with Liverpool John Moores University with its significant tenure so far managed to prove its standing as a leading player in the private higher education sector of Qatar. With the grandeur of the evening, influential members of academia, esteemed guests and corporate attendees involved the ceremony proudly conferred awards on a group of highly skilled, talented and outstanding students, who are the first ones to carry the name and legacy forward, the flagbearers of a new generation of leaders of today and the future! 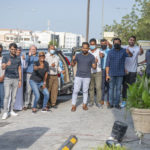 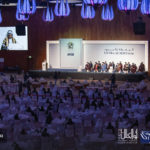 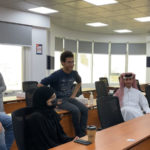